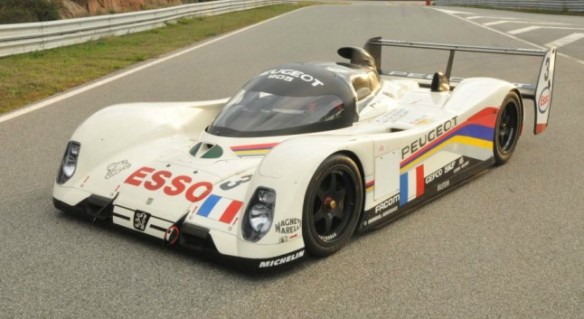 Earlier this week we talked about Audi’s rivalry with the Peugeot 908. Say hello to the 908’s older brother: the Peugeot 905. Built to the World Sportscar Championship’s new-for-1991 rules, the 905 was a little slow at first, being beaten regularly by Jaguar’s mighty XJR-14. It also suffered from reliability problems. And it was ugly.

For 1992, Peugeot made some revisions and the car was much more competitive (and attractive) – sweeping the podium at Le Mans and winning the WSC outright. Unfortunately for Peugeot (you know, because of all that money invested), the WSC ceased to exist in 1993. But that didn’t stop them from sweeping the podium at the 24 Hours yet again.

This car, chassis EV13, debuted in 1991 and was upgraded to Evo 1B specifications later on. It has a 3.5-liter V10 making something like 715 horsepower at a screaming 12,500 rpm. The carbon fiber chassis was produced by aircraft manufacturer Dassault. Eight of these machines were built. Here is the competition history for this one: