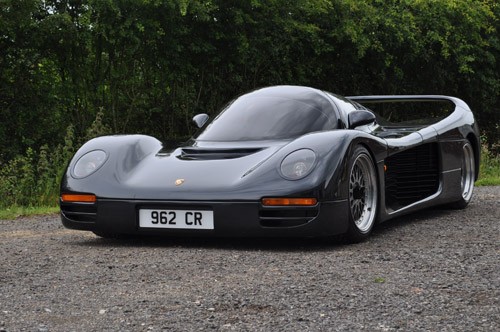 A couple of weeks ago (or perhaps months ago, the days have been flying by) we featured a Dauer 962 Le Mans, a road car variant of the dominant race car, the Porsche 962. This is a similar idea, although the two cars look quite different – and they should, as they were designed by two different people.

Vern Schuppan, an Australian race car driver who has competed in the Indianapolis 500 and Formula One, designed this car as a tribute to his 1983 24 Hours of Le Mans winning 962. The engine is a 3.3-liter twin turbo flat-6 pushing out about 600 horsepower – basically lifted straight from the race car.

It’s a serious supercar. Sixty miles per hour comes in 3.5 seconds on the way to 230 mph. The chassis and body were designed and built by Schuppan (unlike the Dauer, which were 962s converted for road use). The price when new was $1.5 million. This was the first one built, chassis number one. Funding for the project was pulled shortly after this was built and only five or six were built in total.

This is an extremely rare opportunity to purchase an extremely rare car with unbelievable performance that still holds up against even the most modern of supercars. You’ll never pass another one on the road. To see/read more, click here. Unfortunately, Coys isn’t listing an asking price.