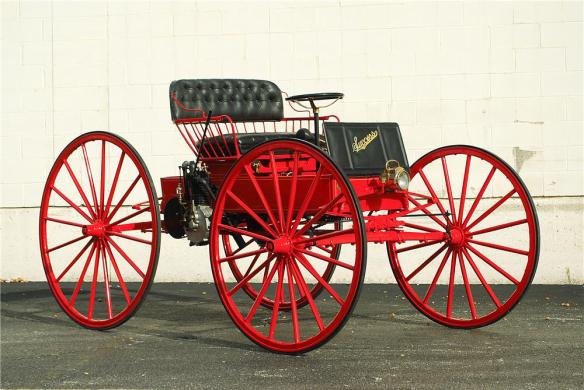 When John C. Hidgon founded the Success Auto-Buggy Manufacturing Company in St. Louis, Missouri in 1906, he probably thought to himself, “With a name like Success, how can this endeavor not be a, well, success?” Unfortunately he went out of business in 1909.

Well he had the right idea anyway – a low-cost, rugged high-wheeler for developing parts of the country where roads weren’t paved and wages weren’t high. The Success (no model name that I can find) was priced at about $250 in 1906. The Curved-Dash Oldsmobile was retailing for $650. It was certainly cheap.

The engine is a two-cylinder, that you can see kind of hanging off the side of the car. Top speed was in the 18 mph-ish range but it got about 100 miles per gallon. With figures like that, maybe someone should put it back into production. When I was looking at this thing, this occurred to me: it’s like a turn-of-the-century hot rod. The body is very lean and low – most of it is below the tops of the wheels. And then those wheels. They’re like Victorian dubs. It definitely has a striking appearance and is one of very few that remain. Click here for more info and here for more from Barrett-Jackson in Scottsdale. And strangely enough, Bonhams is offering a 1908 Success at their sale in Arizona – albeit, in original, unrestored barn-find condition.