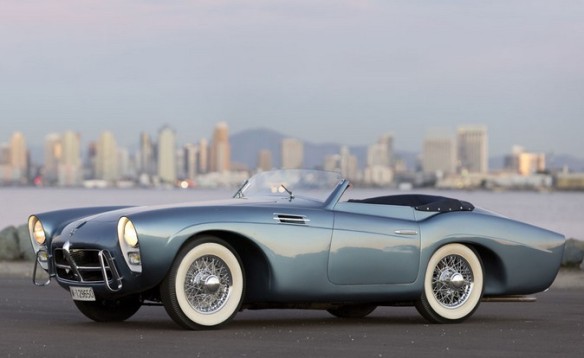 Wow. Pegaso, the Spanish truck manufacturer, produced a line of sports cars in the 1950s and, boy, are they lookers. They are also highly desirable. The best-looking (and meanest) versions of the Z-102 I’ve ever seen have all been bodied by Saoutchik. This Cabriolet tops them all for beauty.

The Pegaso Z-102 was introduced in 1951 and lasted through 1958. Only 84 were built. This uses a 2.8-liter V-8 making 165 horsepower (other cars have other engines). Pegaso went the interesting pre-war route of offering different engine combinations with their chassis’ and then sent the cars to coachbuilders for interesting – sometimes one-off – bodies.

Saoutchik bodied some of the most flamboyant cars of the 1930s and 40s. When the last of the great coachbuilt cars (Talbot-Lago) stopped production, the great coachbuilders that were still around really didn’t have a lot going on. Some of them bodied a few Pegasos – Saoutchik bodied 18 Z-102s. Only one is a Series II Cabriolet (there were three Series I Cabriolets) and this is it. This car spent most of its life in its home country of Spain. At some point, an owner but a coupe body on it but it has been restored to original condition. It’s gorgeous and extremely rare – the most sought after post-WWII Spanish automobile ever built. It should sell for between $1,250,000-$1,750,000. Click here for more info and here for more from this sale.

Update: Did not sell.