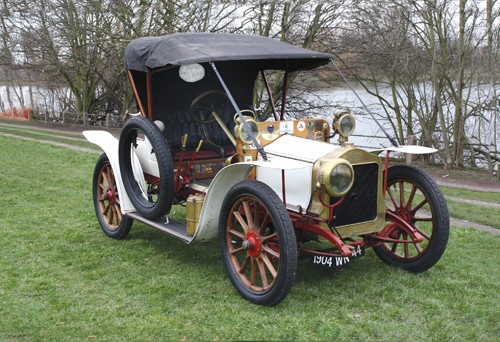 So many different marques built cars in the early 1900s. Lavie was one of many and it didn’t last long – the company (which was actually registered in its owner’s name) only built cars for one year – 1904.

Needless to say, it is an incredible stroke of luck that this lone example survives. Especially considering he only built two cars – total – in his Parisian workshop. Both cars were originally owned by the Lavie family – one by him and one by his brother. This car was owned by Mr. Lavie and the second owner is known as well. But then the car disappeared until 1968, when it went on display at the Le Mans Museum.

The engine in this car is a Delahaye straight-two and the chassis is low-slung with a convertible top. It’s almost sporty – which is perhaps why the man who purchased it from the museum in 1978 used it in almost every veteran car event in France up until 2002. It has received a mechanical overhaul recently and is London-to-Brighton eligible. It is expected to sell for between $98,500-$106,000. Click here for more info and here for the rest of Coys’ lineup.